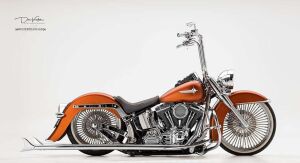 Charles Alfred  Hunter Jr., the elder of two children was born to the parentage  of Charles Alfred Sr. and R. Jewel (Williams) Hunter on January
2, 1966, in Marysville, California.

He  graduated from Del Valle High School in 1984.

Charles was  married in 1995 and blessed with two daughters; Ashleigh
Nicole  Hunter and Kamrynn  Lin Hunter, whom  he loved so much.

He  worked in the IT field for over 20 years. During that time he traveled
in and out-of-state helping to set up and repair computer networks, as
, well as, having his own computer repair business.

His hobby  was tearing things apart and putting them back together.
Charles purchased a new motorcycle, took it completely apart and put it
back together again. I guess you could say that Charles' past-time was
being a cowboy without a  horse and riding a motorcycle.

He  is preceded in death by his father, Charles Alfred Hunter, Sr.

To send flowers to the family or plant a tree in memory of Charles Alfred Hunter Jr., please visit our floral store.